The Iberian town of Ullastret 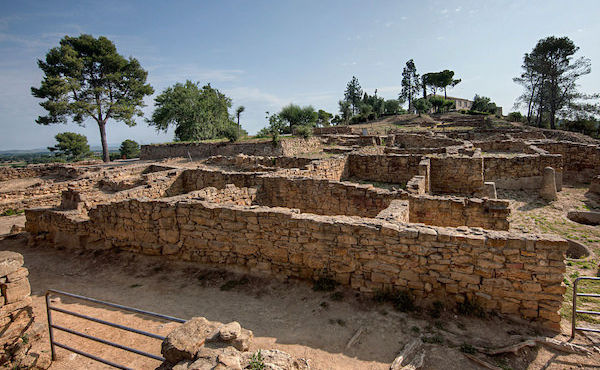 On the hill of Sant Andreu, are the remains of the largest Iberian settlement discovered so far in Catalonia. Founded in the 6th century BC, it dominated the Empordá plain near the Daró river and on the shores of a lake, which dried up in the 19th century. For centuries, it was one of the most active indigetic centers, in constant commercial contact with the Greek Empuries and, surely also with Celtic people from the north, from which they adopted some customs such as nailing the heads of defeated enemies to the door of their houses.

In the year 218 BC, the Romans landed in Empúries as a result of the Second Punic War, to cut off Hannibal’s supply route, who, as you will remember, wanted to reach Rome by crossing the Alps. The Iberians, on that occasion, let the Romans wage their war against the Carthaginians and other allied peoples. But after defeating Hannibal, the Romans did not leave Empordà. That was too nice and rich. So they settled to get what they wanted from these lands and to collect the taxes they considered they deserved.

The Iberians were no longer in agreement with this deal and rebelled. In 195 BC the Romans sent Marcus Porcius Cato the Elder to quell the uprising and pacify the area. One of Cato’s decisions was to condemn Ullastret to abandonment. Its inhabitants were forced to leave. The idea was to make it very clear that whoever faced Rome was going to lose everything.

Ullastret was forgotten and buried, intact, until archaeologists discovered it and found its streets and houses in surprisingly good condition.

The visit is highly recommended for all ages. There are guided tours, of course, but there are also audio guides and there are even very interesting videos and audios on the Internet.

If you want to go in summer, choose a cloudy day because it is usually very hot.