Our dolmen in Llafranc 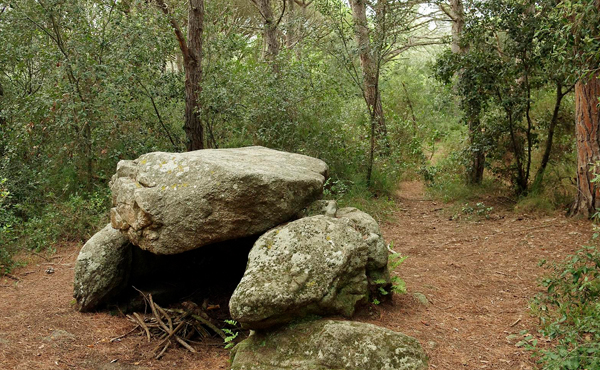 In Llafranc we have our own dolmen. Even though it is 3800 and 5500 years old, it was not discovered until 1954, surrounded by pine trees, vineyards and vegetation.

The first person interested in this dolmen was Miquel Mascort i Martó, but no one believed a dolmen would be there, close to the coast and where the summer visitors were walking by.

So ten more years passed until Professor Lluis Esteve i Cruañas, an eminent specialist, studied, investigated and correctly classified it as a dolmen. Who built it? How did it end up here, in this unusual territory? Experts believe that the builders of megaliths in Catalonia were nomadic shepherds who came down from the Pyrenees and that by settling near the coast they changed their customs and beliefs and evolved towards forms and spiritual manifestations of more complex rituals.

The funniest thing about our dolmen was that, a week after it was studied, a local family demolished it to prevent their little son, who used to play there, from getting hurt by falling rocks.

They had to rebuild it and leave it as it was before.

Visiting the dolmen is easy. It is close to the center and you can walk to it. Ask at the hotel reception.