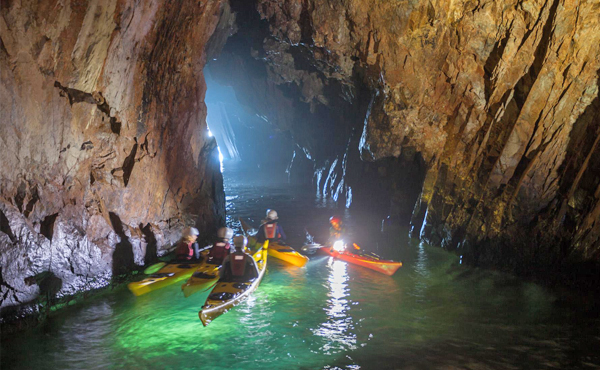 If you come to the Hotel by summer, one thing you can do is go kayaking. From the hotel reception they will help you to rent one the day that you most want.

But try to match your desire to row with some very special dates: August 21 or 22. It’s not about witches or horoscopes: it’s about seeing and experiencing one of the most impressive summer phenomena on the Costa Brava. Let’s go step by step:

Between Tamariu and Aiguablava, more precisely between Cala de Tramadiu and Cala Marquesa, there is a cave called Cova d’en Gispert. With its 150 meters, it is the longest out of the Costa Brava. The entrance is quite narrow but you can kayak in without problem. The first 90 meters are between 3 and 8 meters wide depending on the section and the vault above the water level reaches about 7 to 10 meters high. But at the end of the gallery there is a kind of portico that leads to a spectacular room that is almost 20 meters wide by 20 meters long and has a 22-meter vault. In the center of this room (as it is called) there is a kind of flat table. As it is practically rectilinear, the light from the entrance can be glimpsed from any point in the cave.

This last characteristic gives rise to the phenomenon to which we referred at the beginning. It turns out that only two days in August, and it is usually on the 21 or 22 of this month, the sun rises focused right on the opening of the cave and whoever is lucky enough to be inside suddenly sees how the cave lights up in its entire length and how its walls reflect pink, purple, bright tones. It is a really impressive show.

Some people say that Dalí was so moved to see this phenomenon that he organized a concert in the Hall so that the music would play just as the sun illuminated it. Who knows if it is true. But we all think it is a great idea and one day we should repeat the sunrise chamber concert in Gispert’s cave.